Posted October 27, 2015 by admin under Uncategorized 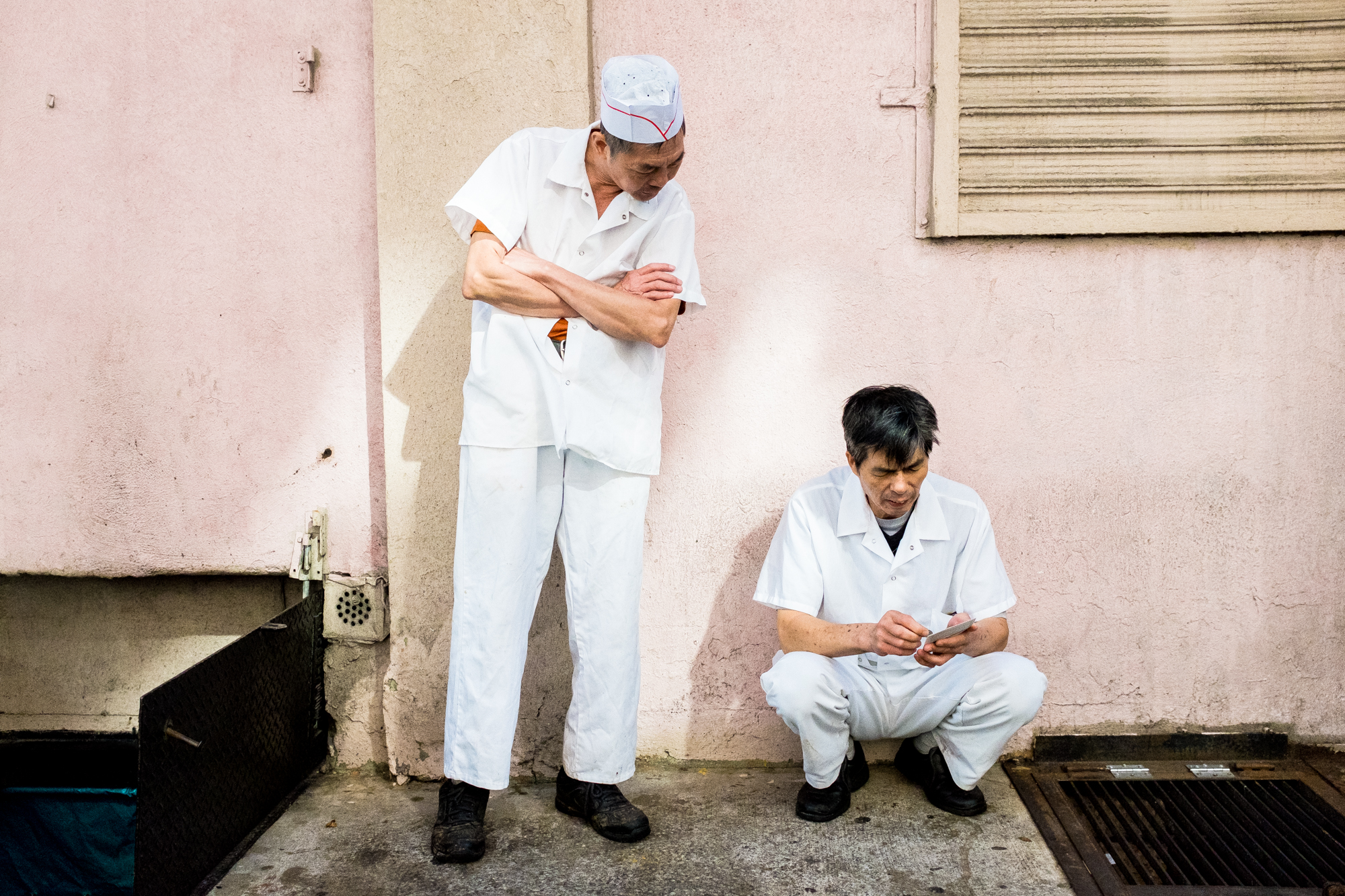 If anyone out there has ever followed any of my previous “Through the Lens” features then they wont be surprised by the fact that the idea for this project came rather organically. I say that because when I would be working on the weekly TTL series I would shoot and write a new original feature that went live every Wednesday and at times, I wouldn’t have a single idea until the middle of the night Tuesday before the deadline day. On those nights where my ideas didn’t come until the very last minute I would typically mention the fact that the feature came together pretty naturally and didn’t feel forced. In turn, that ended up being the overall theme of the column as it took shape over the course of two years. With that said, the idea for this “24-Hours in NYC” project actually came to me as soon as I planned to shoot in the city during my time on the East Coast. I actually didn’t consider any other concepts; themes or ideas and the only thing I needed to do after that was actually make it a reality. I wanted to create a new series based on personal work to feature as a new gallery on my portfolio site.

The idea was simple; I wanted to spend an entire 24-hours photographing the city, my surroundings, and the people in front of me. I wanted to get lost, I wanted to feel the electricity of the city and most importantly, I wanted to create lasting visual memories along the way. I committed to the idea long before the time came to actually execute the plan and went over several different ways to possibly go about getting it done. The one that stuck from the very beginning was to not make any plans and just let the day take me wherever it wanted to. With that said, I made it a point to get an unlimited subway pass and see what happened from there.

I started out on a rooftop in Bushwick, Brooklyn at exactly 12 noon on Friday, October 9th and ended on the same rooftop the following day at exactly 12 noon. Most people wouldn’t want to stay up for 24 hours straight by choice but I knew that it would create an interesting pattern of shooting combined with the lack of planning. I started writing this feature as soon as I came back from New York but between being busy and working on other projects, I let it sit for a while. I suppose that I needed more time to process the project and come back with a clear mind before I could finish. I decided to not make an hour-by-hour run down and instead simply speak of moments that stood out to me while I was shooting.

One thing I actually thought about quite often was how interesting it is to be a photographer working on a personal project with no direction but to shoot whatever it is that caught my attention. I say this because when I am shooting for a specific outlet such as ESPN or Red Bull I already have a plan laid out in front of me of what I need to shoot so the mental process is worlds apart from having no specific “shot list” so to speak. I kept thinking about why I shoot what I shoot, and what it is that draws me in to a certain scene or person. That is one of the more interesting aspects of photography is the fact that no one can tell you what is right or wrong when it comes to choosing what you want to photograph. This type of project lends itself to creativity and the freedom of choice to shoot whatever I wanted to without worrying about a completed goal, or a set number of photos. I simply photographed what drove me to put the viewfinder to my eye.

One of the many reasons I enjoy street photography specifically is the interaction between complete strangers and myself when I approach them to shoot a portrait of them. I’ve had this conversation before with people about that whole process and one thing I’ve come to realize is that it really is quite an interesting concept to go up to someone like that and ask them to photograph them. Most people say they can’t really imagine themselves doing that, and I get it, it can be awkward and uncomfortable. On the other hand, I have been a photographer for long enough now to say that a good portrait of someone is so much more about the interaction compared to the end result. I say this because you would never have the end result without the previous interaction first being successful. Once you break down that barrier, you get an entirely different experience and a much more genuine photograph in the end. However, on the complete opposite side of things, there is the “point and shoot” method to street photography. Basically if you stopped and asked for permission to photograph someone you already missed the shot and secondly, you missed the entire point of that style of shooting as it is. It is absolutely nothing more than that very moment. With that said, between the two I don’t really have a preferred style because I see the benefits to both. They are equally unique and each style yields vastly different results.

Throughout most of the early afternoon the weather was as good as it gets for a fall day on the East Coast. If you have ever lived on the East Coast you know exactly what I am talking about. Fast forward a few hours and the clouds rolled in over the tops of the skyscrapers almost as if in fast-forward. Within minutes the sky opened up and the rain started pouring down. It happened at the same exact moment the last bit of daylight was left and there wasn’t much time to do anything but get caught up in it. I was surprised to see that the majority of people just pulled out their umbrellas and went about their day, the sign of being true New Yorker. Others just went with it as if they had no other choice.

I continued to make my way through the streets, shooting what I could and doing my best to capture the feeling of the rain. Not too long after the rain hit my boots were soaking wet. By that time it was completely dark and after already walking around for six hours or so my feet started to blister. It was an interesting moment when that all happened because I knew that I still had around 18 hours left of walking what seemed like endless blocks and the last thing I could think of to make the process go smoothly was a pair of soaking wet boots. While I was shooting in the rain I kept thinking about the thousands of homeless people scattered throughout the city without an escape route. Knowing that I didn’t have a specific place to go, and knowing that I would be in the streets throughout the night really put things into perspective. It was an intimate look at the mental process someone goes through when they don’t have anywhere specific to go to get out of the elements. At one point hours later my boots and socks were soaked through so I stopped to get a different pair of socks. While I was sitting down on the sidewalk in a little stairwell I took my boots and socks off and was let my feet dry as people walked by surely wondering what the hell I was doing. I didn’t have anywhere to dry my boots off, so I did the next best thing and used the plastic bags from the store to wrap my feet in before putting them back in my boots. At this point the rain had stopped, the sky cleared up and the temperature was right around 55 degrees.

Throughout the night the city slows down much more than I had imagined. As the hours passed less and less people were around and the vibe was completely different than before. It was peaceful and mesmerizing in a way that is hard to describe without actually being there alone. At one point I walked across the Brooklyn Bridge into Manhattan and I was the only person on the entire bridge besides the sleeping cop in the little guard shack. The calmness was surreal at times and that was actually one of the more memorable moments for me. As the weather gets colder, the heated subway stations are one way to keep warm and for many people this is the only way to keep warm.

Over the years I always wondered how homeless people could just sleep anywhere whether in an alley, on a cold sidewalk or on a simple bench but towards the 19-hour mark of going non-stop I started to understand. When your body gets tired enough, you can’t go anymore and it becomes hard to simply stay awake no matter where you are, or regardless of how comfortable you are. I found myself going back and forth between being awake and sleeping every time I would sit down on the subway in the late, late hours of the night. As I sat exhausted on the train waiting for my next random stop, I no longer had to wonder. As someone that has long been fascinated by the lives of homeless people, each time I shoot photos of someone in that situation I feel myself understanding the struggle more than before.

At one point around 4:30AM I was on a train to the next destination and it surprised me to see that it was packed. All of the sudden this was the moment where the day transitioned from night to morning and it became obvious that a new day was starting. I knew at some point the subway stations and streets would be filling up once again like clockwork but this was a standout moment where it was completely obvious. I spent the rest of the morning out shooting and reflecting on the process until hopping on my final train back into Bushwick to the rooftop where it all began 24-hours before. I ended up exploring neighborhoods all over Brooklyn, Manhattan, as well as Queens and a few other places that I’m sure I’m forgetting. I walked a ridiculous amount throughout the whole process, rode the subway more times than I can remember and shot hundreds of photos along the way. NYC is an incredible place and in reality would take days, weeks, months and years to fully explore. I’m just glad I had the opportunity to see this project go from concept to completion, which is always the goal.

I didn’t know exactly what direction this bit of writing would go in or what shape it would take. I just wanted to give the viewer some perspective on the process of shooting the new gallery before looking at it and seeing the end results so hopefully this does just that.

WARNING: The photos in the gallery represent the smallest fraction of the overall vibe of NYC. In no way did I intend this to be a look at all things NYC, or a tour around the city showing all of the well-known landmarks. The gallery is a selection of work based on shooting in NYC within the 24-hour time frame and nothing more.